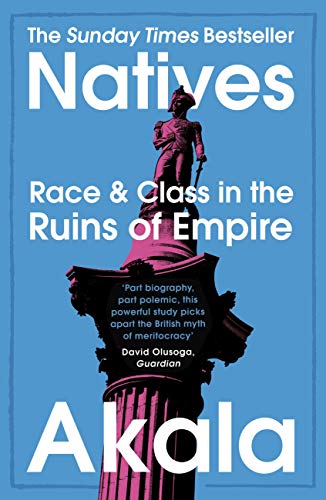 Natives: Race and Class in the Ruins of Empire

My biggest take from the book is, although Britain advertises itself as a bastion of liberalism and democracy, where racism barely exists and a multicultural way of living is the status quo, an empire that spread this enlightenment and democracy around the world; author rejects this narrative and tells us the story of how Britain treated its citizens of colour that moved within the Empire (which London asked them to do to heal the wounds of the World War II) and how the legacy of the global Empire is intertwined with industrial scale Atlantic slavery, racism and classism. This is a very serious topic which I can just consider myself as a student of at the moment therefore I will refrain as much as possible from making personal comments about the subject. Instead I will share some nice quotes from the book and list the things I learnt from the book.

A general guide to how the world works:

An existential contradiction in racism of the empire:

You see, while the people in the colonies were being told Britain was their mother, much of white Britain had convinced itself that these undeserving niggers – Asians were niggers too, back then – had just got off their banana boats to come and freeload, to take ‘their’ jobs and steal ‘their’ women. Never mind that Britain has a German royal family, a Norman ruling elite, a Greek patron saint, a Roman/Middle Eastern religion, Indian food as its national cuisine, an Arabic/Indian numeral system, a Latin alphabet and an identity predicated on a multi-ethnic, globe-spanning empire – ‘fuck the bloody foreigners’.

We judge the street corner hustler or working-class criminal – from East Glasgow to East London – but we see a job as an investment banker, even in firms that launder the profits of drug cartels, fund terrorism, aid the global flow of arms, fuel war, oil spills, land grabs and generally fuck up the planet, as a perfectly legitimate, even aspirational occupation. I am not even necessarily passing judgment on those who are employed in that system, as I’m complicit in it to a degree because of my consumption, I am just pointing out that our evaluation of what constitutes ‘crime’ is not guided by morality, it is guided by the law; in other words, the rules set down by the powerful, not a universal barometer of justice – if such a thing even exists. We need not remind ourselves that slavery, apartheid, Jim Crow, a man’s right to rape his wife and the chemical castration of gay people were all ‘legal’ at one stage of very recent history, as was most of what was done by Nazi Germany. This ‘if you just pull your socks up’ trope also ignores the reality that many Britons (and people around the globe) are poor and getting poorer through no fault of their own under austerity – the technical term for class robbery. Can a nurse whose pay increases are capped at 1 per cent – below the rate of inflation – by politicians who have not capped their own pay, change the fact that he or she is literally getting poorer every passing year, despite doing the same bloody hard work?

Although a bit unrelated but I like this perspective for China as well, given the current cold war against China (focusing around how undemocratic current Hong Kong administration and alleged Huawei spying activities):

Less than a century ago, the Chinese in British-ruled Hong Kong lived in squalid, segregated ghettoes and were governed by racist legislation;5 today the ethnic Chinese of Hong Kong are on average some of the richest people on the planet. How quick the pace of change in world affairs. When China was militarily and economically weak and politically fragmented by external and internal forces, Chinese people left China as exploited indentured servants and found themselves on the receiving end of many of the same racist assumptions and discriminatory immigration legislation as other ‘subject races’. Today you can check into any Park Lane hotel and you are as likely to see a Chinese guest as any other nationality. Over the past few decades, China has pulled at least 500 million people out of poverty (the Communist propagandists at the World Bank actually put the figure at around 800 million), industrialised at a pace faster than any nation before and today stands at the leading edge of many green technologies, and it has managed to do all of this without invading and colonising half the planet

I recommend this book to everyone living in the UK or interested in the recent BLM movement and the history of slavery and racism.