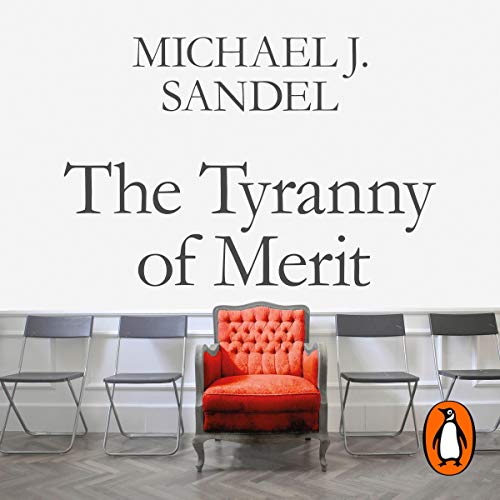 The Tyranny of Merit: What’s Become of the Common Good?

Another eye opener - but for kind of worse this time. Before reading the book I was a firm believer in meritocracy, now I think we're doomed a bit for the short term.

First, a quote from the author Michael Sandel:

The tyranny of merit arises from more than the rhetoric of rising. It consists in a cluster of attitudes and circumstances that, taken together, have made meritocracy toxic. First, under conditions of rampant inequality and stalled mobility, reiterating the message that we are responsible for our fate and deserve what we get erodes solidarity and demoralizes those left behind by globalization. Second, insisting that a college degree is the primary route to a respectable job and a decent life creates a credentialist prejudice that undermines the dignity of work and demeans those who have not been to college; and third, insisting that social and political problems are best solved by highly educated, value-neutral experts is a technocratic conceit that corrupts democracy and disempowers ordinary citizens.

So, what is Meritocracy?

It's basically the political system where individuals are rewarded according to their talents and hard work rather than according to their station in life and their privileges. In a meritocracy, success is in the grasp of the individual and no one can be held back because of their race, religion, gender or class. You can move up if you work hard enough.

But it has its downside as well, say if you're successful or rich thanks to your hard work and talent, what do you think of yourself if you're poor? Doesn't it mean that if you deserve your rewards in this life, you also deserve the punishments too? Basically your chance with life is in your hands and you're absolutely responsible for your life! It doesn't sound too good when you're not that of a success, does it?

As with lots of interesting notions, meritocracy has its root in Christian theology. Although coined by Michael Young of the British Labour party in his book calledThe Rise of the Meritocracyto ridicule the society where all democratic thinking and institutions are replaced with people of education and intelligence, we can see the arguments of merit in the notion of gaining access to the Heaven debate. Some Christians think that if you lead a good life without sins, God will give you access to his heaven. Some other Christians deny this idea violently, they claim that God is omnipotent thereby you cannot change his mind with your good deeds and actions. God has already elected who to put to his heaven and gives them good Christian life of hard labour and riches to show his selection. Which basically means, if you're rich and having a wonderful life in your community, you are probably selected by God for the Heaven! This notion in time became corrupted in the sense that individuals started to strive for a rich life which is a sure sign of Heaven! So, if you became rich, God loves you and will put you in his Heaven, and if you're poor, that's an indication that you might be forgotten! In time, meritocracy became the secular version of this corrupted predestination idea of religious people.

The notion of merit in public life started around the 1950's where major Ivy League universities in the US were still accepting students based on their family, wealth and religious and racial backgrounds. Places like Harvard were usually filled by students of white protestant rich families that are already graduates of those places in the first place. Once these universities started to apply general skill tests like SAT, merit started to infiltrate the public life discourse more and more. Mind you, using skill tests didn't change that much in terms of class representation in those universities, Harvard and others are still accepting students from the upper rings of the society. Reason? Because nevertheless it is now based on skill and hard work to get in to those universities, it is still only achievable if you're coming from a wealthy family. You need special tutoring, courses for the test preparation, you have to be active in sports (especially expensive posh sports that these universities are interested in) etc. No poor kid from a lower class could spend the time and money for these activities anyway.

Michael Young, a sociologist and Labour politician wrote the book called "The Rise of the Meritocracy" as I mentioned above at 1958. He wrote this book as a dystopian satire about the dangers of forcing society to this notion of merit, but eventually politicians started using the term in a positive way to envisage a more just society where there's the equality of opportunity, rather than practical equalities of the public life. And then neoliberal globalism happened.

Before meritocracy, people usually were born into their classes and mobility between classes were limited, which was kind of ok, knowing that it wasn't your fault to be a worker in this life, gave you a better feeling about yourself. The same went for the rich, as they didn't have too much hubris about their stations knowing they didn't deserve all these riches in the first place. Furthermore, it was the time of New Deal when middle and lower classes were prospering in the western world, a time when as a factory worker, you can have a nice house (although with a mortgage) and a car; have dignity of work and solid sense of belonging with the community you lived in.

Then things changed, world decided to open borders for money and business (and a side effect of people) and these solid jobs for the working and middle classes left the towns and the countries for cheaper places elsewhere in the world. This caused some confusion in public and the center left parties of the western globe, instead of fighting against it, embraced the idea of globalism. So as a solution, they told these people to "learn more to earn more", get a degree to have a better job. They basically told us that we now live in a meritocratic society and if we try hard enough we can move up in this life.

Michael Young depicted the system to crush around 2034 from looking ahead in 1958 but in 2016 the world had Trump elected as the president of the US (his kind of populists were winning elections all around the world before that time anyway, most notable one is the Turkish president who is in the office since 2002 for example). Trump lost for the time being but if things don't change over the next four years, who can guarantee that he or some other populist might have a worse comeback?

As I mentioned in the beginning, meritocracy is a double edged sword. Since it says that you can do it if you try, winners in this political system think that all the success they had is their own making and this creates an excess of hubris among them. The opposite goes for the losers, now people with bad luck in life think that it's their fault that they are poor, unhealthy and unsuccessful. This creates a resentment against this political system and the winners automatically. And resentment is a powerful emotion that politicians can tap into and direct it however they want easily.

Furthermore, you cannot even have absolute meritocracy anyway. Why? It all comes down to luck anyway at the end:

It's impossible to have equal opportunity with others.

The reason I'm giving a 4 star is that I don't know how to solve this problem by the end of the book! Although author Michael Sandel has these suggestions:

All in all, author suggests that we should think about the common good rather than our own small successes in life. Which is good but a bit vague, hence the four stars!

Finally, a good one from Obama:

[I]f you’ve been successful, you didn’t get there on your own. You didn’t get there on your own. I’m always struck by people who think, well, it must be because I was just so smart. There are a lot of smart people out there. It must be because I worked harder than everybody else. Let me tell you something—there are a whole bunch of hardworking people out there. If you were successful, somebody along the line gave you some help. There was a great teacher somewhere in your life. Somebody helped to create this unbelievable American system that we have that allowed you to thrive. Somebody invested in roads and bridges. If you’ve got a business—you didn’t build that. Somebody else made that happen.